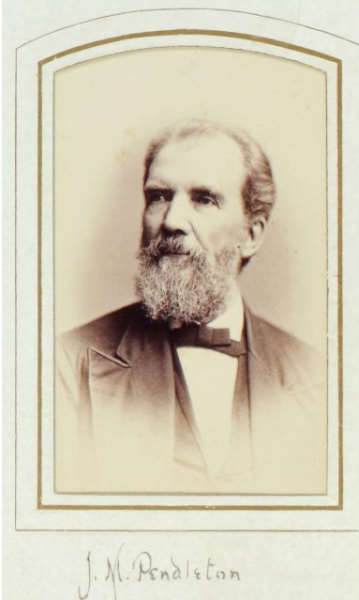 Reminiscences of a Long Life

Elder William Tandy, one of the best of men, had long been pastor of Bethel Church, but for some years his impaired health prevented his preaching with any regularity. To my surprise the church, in the beginning of the year 1833, invited me to preach two Sundays in the month. A similar invitation came from Hopkinsville and I went there, where I remained four years. The arrangement was for me to become a student of the Academy nuder the charge of Mr. James D. Rumsey, who had a fine reputation as a classical scholar. I was to make a special study of Latin and Greek. The two churches agreed to give me, each, a hundred dollars a year, a sum thought sufficient to pay for my board, clothes, books, and tuition. I never knew why it was, but at the end of the first year the Bethel Church added fifty dollars to my salary, so that I afterward received two hundred and fifty dollars a year as long as I remained in Hopkinsville. Some may think that this was poor pay; but my deliberate opinion is that the pay was better than the preaching. I knew hardly anything about the construction of sermons. I did not know there was such a word as “Homiletics,” and my expositions of Scripture were sadly superficial. I had to preach every Sunday and two Saturdays in each month, for it was the. custom then for churches to have monthly Saturday business meetings preceded by a sermon. The Saturday sermons were addressed specially to church members, while the Sunday discourses were designed for promiscuous assemblies. With all this preaching I had to recite my lessons in the Academy five days in the week. It was more than any mortal man could do as it ought to have been done. All things considered, it is a marvel that the churches endured my preaching; but they were content for “patience to have her perfect work.” If the brethren and sisters had been literal descendants of Job they could not have treated me more generously. At this late day I feel and acknowledge my obligations to them. The members of these churches, with very few exceptions, were “sound in faith” and consistent in practice. While they did not claim perfection, they “forgot the things behind, reached to those before, and thus passed toward the mark for the prize of the high calling of God in Christ Jesus.” In my long life I have not met with better men and women. I was fortunate in boarding for two years in the family of Dr. Augustine Webber, who had more theological knowledge than any layman I have known, while his general intelligence was quite extensive.

So far as I know there are only two persons now living to whom I preached the four years I resided in Hopkinsville. The rest have passed away and have, I trust, found a home in heaven. “Blessed are the dead who die in the Lord.” They are free from all the encumbrances of the flesh and mingle with “the spirits of just men made perfect.”

Another surprise was in reserve for me. The church at Hopkinsville, of which I had become a member, called for my ordination. I thought it premature, but with great hesitation gave my consent. The ordaining Council, consisting of Elders Reuben Ross, William Tandy, Robert Rutherford, and William C. Warfield, met November 2, 1833. The examination as to my “Christian experience,” “call to the ministry,” and “views of doctrine” was far from being thorough; but the Council seemed to be satisfied and decided in favor of my ordination. The sermon was preached by Elder Ross from Hebrews xii:3, “For consider him who endureth such contradictions of sinners against himself, lest ye be wearied and faint in your minds.” The impression the sermon made on me was, that ministers, to be preserved from discouragement in, their work, must consider what Christ endured. How often have I had occasion to think of this in a ministry of almost sixty years! I here record my conviction that the “love of Christ” is the true inspiration to the preaching of the gospel, and that it is the highest wisdom to copy His example.

The men composing the Ordaining Eldership have long since fallen “asleep in Christ.” Warfield, though the youngest, was the first to die, then  Tandy, next Rutherford, and last Ross. In these men of God were exemplified Christian and ministerial excellencies which commanded the respect and love of all who knew them. I was not present at the funeral of these ministers, but I have been told that Elder Rutherford, who had not been known to weep before in preaching, was so overcome by the death of his “beloved brother Tandy” that he was unable to speak, and left the services with Elder Ross, whose tears rather helped than impeded his speech.

These ministers of God served their generation according to the divine will, but Elder Ross was “easily chief.” I have witnessed many impressive sights, but I can call up nothing so impressive as Reuben Ross, in tears, entreating sinners to be reconciled to God. Of commanding person, he exemplified in the pulpit a solemn and majestic dignity that I do not expeet to see again. “The fathers, where are they?”

Warfield died in 1835, Ross in 1860 and Tandy and Rutherford in intervening years. It would gratify my curiosity, but it cannot be, to know that the glorified spirits of these men of God, amid the employments of the heavenly world, have taken an interest in my ministerial career. There may be a closer connection between earth and heaven than we suppose; but how many things we do not know! While living in Hopkinsville, that is to say, in the year 1834, I had the severest spell of sickness I ever experienced. I was taken with bilious fever in August and it was November before I was able to preach again. I was reduced to such a state of emaciation and weakness that I was unable to raise my hands to my head. My friends generally thought I would die; but I did not think my case hopeless, and this may have had something to do with my recovery. Dr. Webber was my physician and did whatever medical skill could do. As August was the month in which my sickness came on me, I have ever dreaded it more than any other month in the year. I have often thought of the man who said that he had always noticed that if he “Ilived through the month of June he lived all the year.” So it has been with me in regard to August.

The year 1835 brought sorrow to my heart: My special friend, Rev. John S. Willson, died in August, and, as already stated, Warfield departed this life. He died in November. Willson was pastor of the First Baptist Church in Louisville, Ky., then worshiping on Fifth and Green Streets. He had been for a short time Agent of the American Bible Society, and while performing his agency became acquainted in Louisville and was called to the pastorate of the church named. This was in 1833, and his labors were crowned with the blessing of God. He was “a burning and shining light,” an attractive preacher, full of love and zeal, eloquent and transcendent in exhortation. When he died it was truly said, “A great man has fallen in Israel.” The Baptist State Convention met in Louisville in October, 1835, and during its session Dr. Noel preached a sermon commemorative of the “Life and Work ” of Willson. It was an appropriate and able discourse, parts of which were very pathetic. Willson died at about forty years of age, and it has always appeared to me that he brought on his death not only by his unwearied labors, but specially by expending unnecessary vocal power in preaching. In the greater part of his ministry he indulged in vociferation, though his loud voice was by no means unpleasant. After his settlement in Louisville he attempted to change his manner of preaching, being convinced that the deepest feeling is not expressed in the loudest tones of voice. It would be well for preachers to remember this fact.

From the Convention in Louisville I went in company with John L. Waller (of whom I shall say more in another place) and others to the Western Baptist Convention in Cincinnati. We went up the beautiful Ohio and it was my first experience in steamboat traveling. I thought for a time of danger, but soon forgot it. The objects of the Convention were the promotion of acquaintance and union among brethren West of the mountains, and the more zealous prosecution of the work of Missions. Here I met for the first time such men as S. W. Lynd, John M. Peck, John Stevens, and many others. I never knew why, but the organization was not permanent, and I do not think it had meetings except in the years 1834 and 1835. It was a failure rather than a success.

Returning to Louisville I again saw the bereaved family of my friend. Willson and I well remember how sad our parting was. Mrs. Willson’s face was the picture of sorrow and the children were in tears. Who knows the crushing grief of a widow’s heart? Who can adequately sympathize with children bereft of a loving father’s care? But our God is the God of the widow and of the fatherless ones.